When "Big data" is not Enough: A Report of the BigVideo Conference in Aalborg

(also on behalf of: Jaap Blom -lead developer at the CLARIAH project, and Rob Wegter, media scholar who represented the CLARIAH pilot projects at the event).

During three days in November 2017 around thirty researchers and practitioners interested in video analysis came to Aalborg, Denmark, to the “BigVideo sprint and mini-conference” organized by Professor Paul McIlvenny of the Department of Culture and Global Studies, and Assistant Professor Jacob Davidsen, of the Department of Culture and Psychology of Aalborg University. The event was sponsored by DIGHUMLAB, which is the national distributed research infrastructure in Denmark, and the Video interaction lab (VILA) of Aalborg University. This blog will present an overview of the event, and conclude with the most interesting parts from a CLARIAH perspective.

The main audience of the conference were experts in the field of ethnomethodological conversation analysis (EMCA), but also researchers from different fields such as ethno-cinema, media studies, and digital culture, who were attracted by the interesting, mostly qualitative approach to video analysis of this conference (and they were very welcome to share their views). 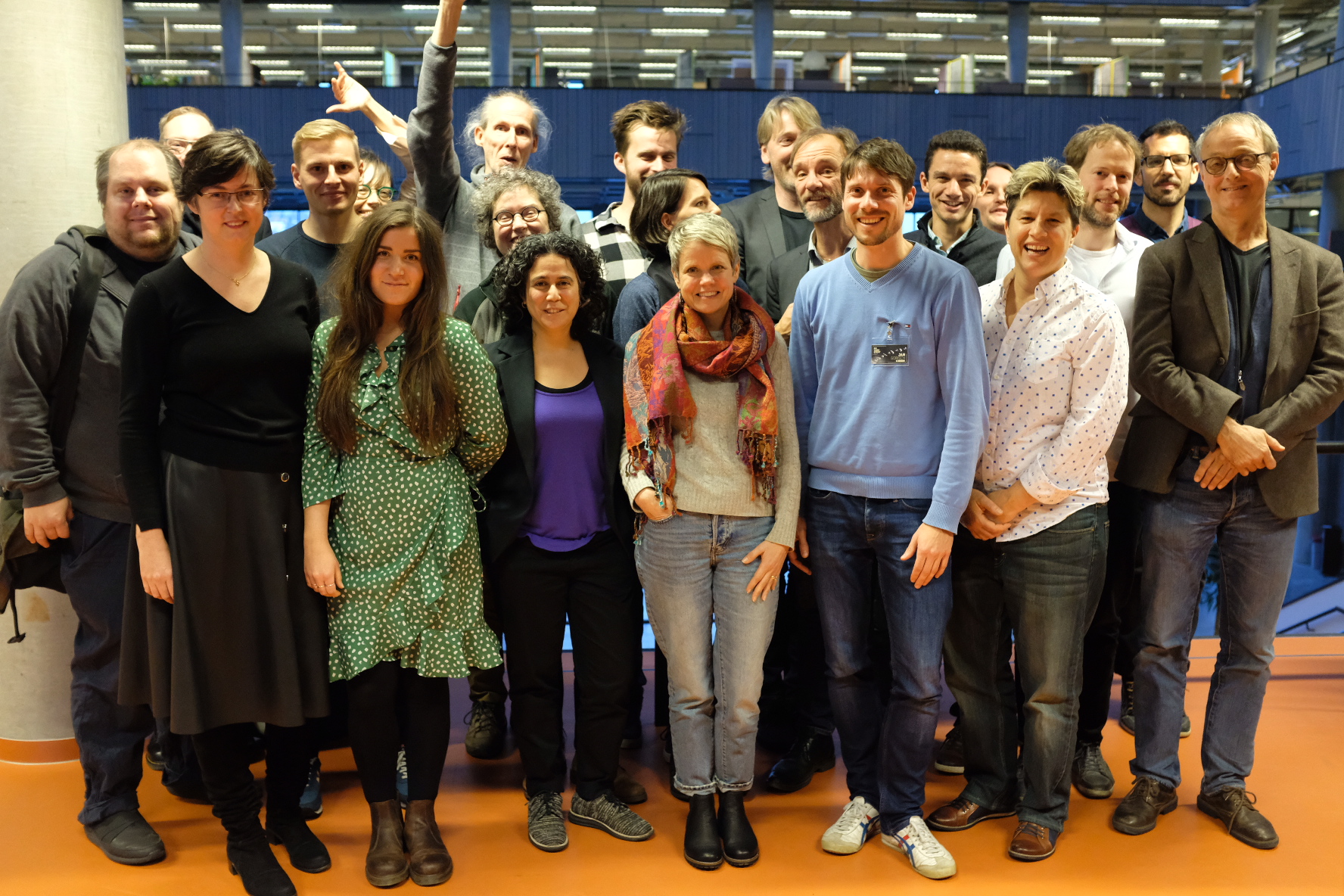 The purpose was to work around the idea of putting forward a “manifesto” for innovative qualitative methods to working with video in a “human-centered data” approach. Recognizing the importance and impact of quantitative methods and big data, the organizers strongly advocate the need to be critical and look closely again at the qualitative side of research in this context. As a parody to the term “big data”, they (not so seriously in the beginning) used the term “big video”, which drifts the focus from aggregated data towards the individual “objects”, which are richer (and bigger) moving images. This need for a “sense of balance” in working with video, originates from the significant changes that technology has brought to the research activities of capturing, storing, archiving, accessing, collaborating, sharing, visualizing (which often brings the need of transforming sources into data), and publishing. The conference also focused on the tools that support these tasks, and the methodological implications of their use.

The opening keynote by Paul McIlvenny and Jacob Davidsen summarized their collaborative work on experimenting with 360-degree cameras, stereoscopic cameras, multi-track video and audio streams, multi-track subtitling and video annotation. More references and illustrations of their work can be seen in the BigVideo Manifesto , published at Nordicom. 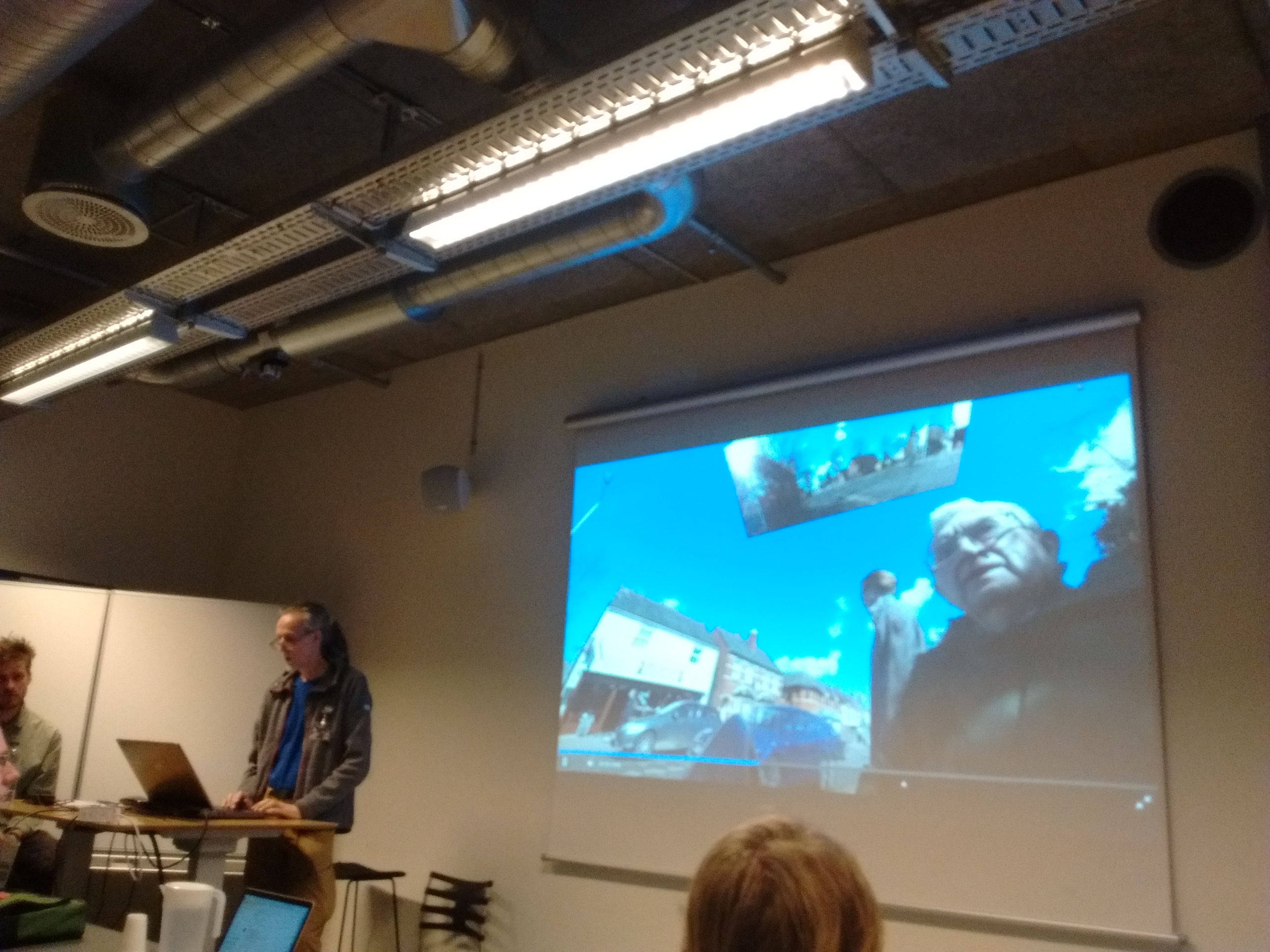 The other keynote speakers of the conference spoke about their perspectives on using video in research from their different disciplines: Anne Harris (RMIT, Australia), an expert on participatory methods discussed video in the framework of social movement theories and ethno cinema. Inspired by Jean Rouch, her focus is on the use and creation of “non-representational” videos for researching cultures and problematic societal situations. Robert Willim (Lund University, Sweden), showed another angle of video “as method,” in which cultural analysis becomes closer to art, when video devices are not meant to “objectively” capture realities for further study, but to transform them into new visual and aural digital experiences. In one of the “data sessions” that he lead, we observed and discussed his experiment with a recording of natural landscapes and sounds with a home device resulting in a “rarified” version of the original recording, leading us to reflect on fieldwork, reality capture and preservation.

For our work in the CLARIAH project, the most interesting and awaited keynote was by Adam Fouse (Aptima, USA), an expert on “interactive visualization of complex data” and on the analysis of time-based media. He is the developer and maintainer of the “ Cronoviz ” tool, a rich environment for the visualization, navigation and analysis of time-based media and accompanying data with a multi-modal approach. This tool facilitates the use of multiple, synchronized sources, the integration of data captured by sensor devices, geographic positioning, and the integration of notes taken during field work or from observations during the analysis. 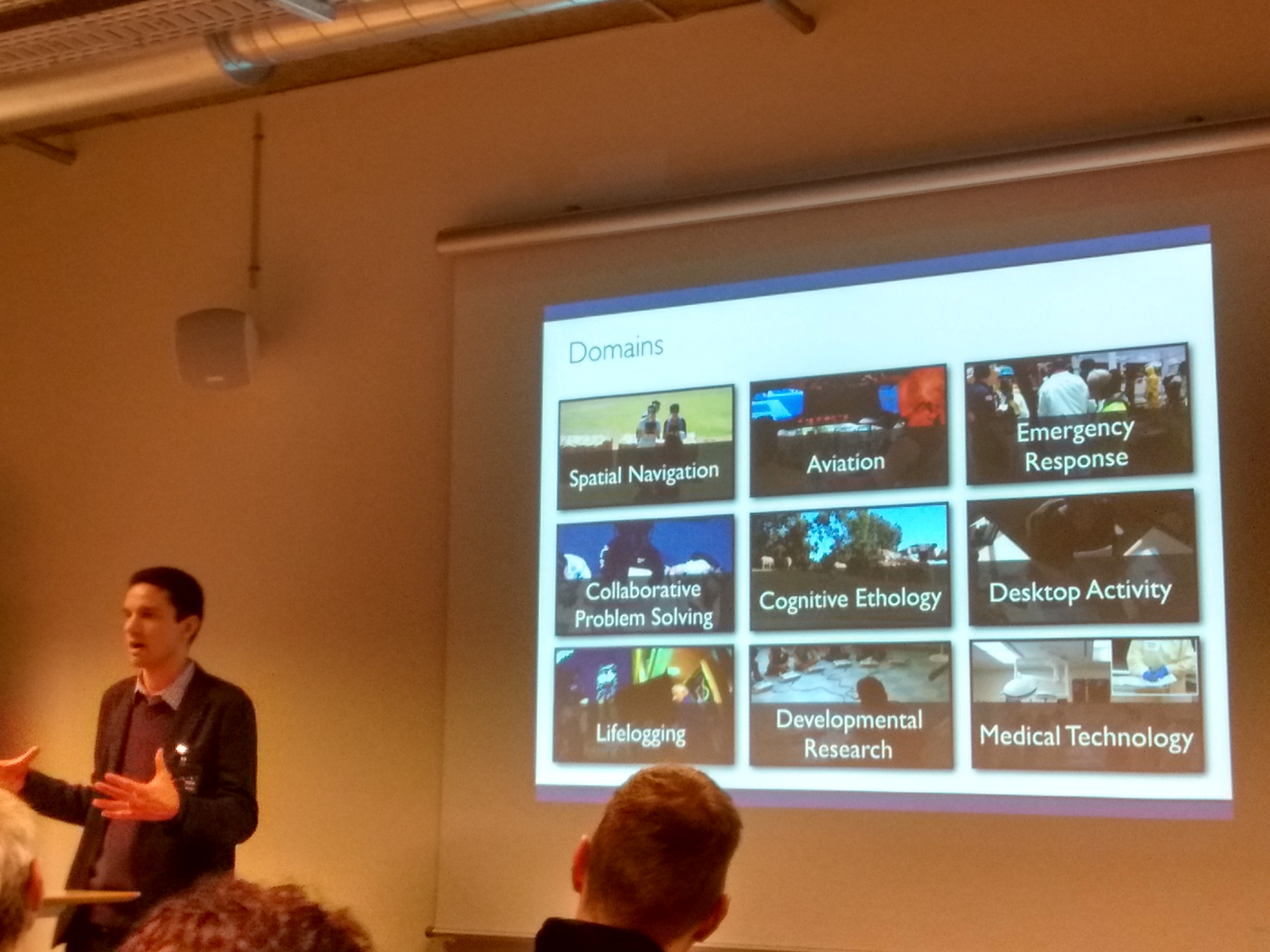 Adam Fouse has also conceptualized the research process of scholars working with audio-visual data (we have also done some studies in the context of CLARIAH - see our paper -Melgar et al., 2017 ), and presented an overview of the workflows that take place in video-based research in different domains. Gladly for our work in implementing an annotation tool in the CLARIAH environment, we observe similarities also with media scholars and oral historians in those tasks and processes that he listed. Not in vain, Unsworth (2000) refer to annotation as one of the “scholarly primitives”, which are those “basic functions common to scholarly activity across disciplines, over time, and independent of theoretical orientation.”

One of the most surprising experiences of this conference to me, was to get acquainted with the method of “data sessions.” These are meetings in which communication scholars (conversation analysts to be more precise), get together to look at videos (data), and do the analysis as a group. Coming from the field of information science myself, and familiarized with media scholars from my previous research and work at CLARIAH, I have often seen scholarly work as quite a solitary activity. Even though scholars exchange their observations with peers via different channels during their research, or work in teams, I never came across this interesting (“proto-analyses”) practice with defined protocols. In these sessions, someone brings an “unpolished” source (audio, video) and/or a transcript, and everyone writes down their observations either freely or guided by a problem or question, which are then shared and discussed in the end.

Our contribution, presented by Jaap, myself, and Rob Wegter (media scholar who participates in one of the CLARIAH pilot projects), consisted of explaining the CLARIAH project, and the development of an annotation tool for video, audio, images and text for that project. Jaap explained his previous prototypes that led to the initial ideas for the CLARIAH annotation tool, and Rob explained how he is using the initial versions of that tool for doing the analysis of documentary films. 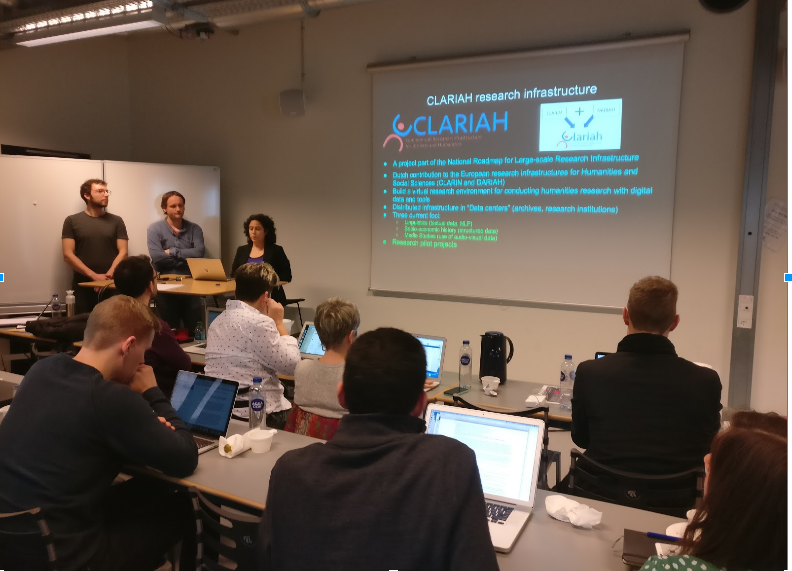 For our work in the CLARIAH project, besides Adam Fouse’s keynote, I highlight:

Notice
At the moment the Media Suite has only been tested in Google Chrome, there may be undetected issues when using this browser.

1. Use of copyright protected data

The CLARIAH Media Suite contains material that is protected by intellectual property law. This material is only permitted to be used within the Media Suite environment. It is therefore expressly forbidden to duplicate and/or publish this material, regardless in what form, for example by downloading material or by making a screenshot (photo of the screen) or screencast (film of the screen), without the explicit permission of the rightsholder.

The Netherlands Institute for Sound and Vision is the tradename of the Foundation Netherlands Institute for Sound and Vision. We are located at Media Parkboulevard 1 (1217 WE), in Hilversum. We are registered in the Chamber of Commerce under the registration number 41194855. Your details are handled carefully and protected satisfactorily. We do so in accordance with the General Data Protection Regulation (GDPR) and other applicable regulations.

How do we collect personal data?

Sound and Vision uses cookies. A cookie is a small file that we send with the webpage, and that your browser stores on your computer. For example, we use cookies to analyse how the website is used, and to remember settings and preferences when you visit our site.

We use cookies to optimise the functioning of our website, and to offer you a better visitor experience.

This site stores cookies on your computer that are related to the functioning of the website. The aim of these cookies is to optimise the user experience by storing your preferences. In no way do these cookies store sensitive data. According to the current cookie regulations, they may be stored without permission.

We store analytical cookies from Matomo on your device. We use these cookies to register which pages you visit, whether you have visited them before, and, for example, which device and browser you use to do this. In this way, we can offer you the best experience when you are searching for information on our website. This data is anonymous, and is not linked to your name, address, email address or other personal data. Your IP address is also anonymised.

Which data do we process?

We process the following personal data from our website users, in so far as we receive this from the identity providers:

What do we process this data for?

We process your personal data for the following purposes:

On what basis do we use the personal data?

Our processing of your personal data for the above-mentioned purposes has the following legal basis:

How long do we store your data?

Is your data shared with other parties?

NO, your data is not shared with other parties.

How is my data protected?

We have taken appropriate technological and organisational steps to protect your data against loss and against use contrary to the rules. We constantly keep up to date with the current situation regarding technological protection of personal data and will do everything possible to prevent the loss or unlawful use of personal data. We do our very best to protect ourselves against the activities of 'hackers'. However, we cannot guarantee this protection, due to continual technological advances.

You have a number of rights. These are:

In addition, you can also:

Where can I go with my questions?

If you have questions about our processing of your personal data, or if you want to make use of one or more of your legal rights, then contact: