By: Liliana Melgar and Marijn Koolen

CLARIAH had the pleasure to organize a two-day face-to-face expert meeting and workshop that aimed to improve annotation interoperability within the CLARIAH infrastructure as well as with external annotation tools. The meeting was organized by Marijn Koolen (KNAW Humanities Cluster) and Liliana Melgar (University of Amsterdam) and took place on July 12-13 in Amsterdam.

While analyzing data, scholars often need to annotate various types of resources (texts, images, or audio-visual). Annotating, in the broadest sense of the term, consists of activities such as segmenting, transcribing, adding notes, tags, classifying those tags, grouping resources in bookmarks, linking, or adding other user-metadata to those sources and their fragments. Since these activities are essential to interpretation, annotation has been recognized as one of the “scholarly primitives” (Unsworth, 2000), and as an essential part of knowledge production from the perspective of scholarly work as a research ecology (Walkowsky, 2016).

As an infrastructure project, CLARIAH aims to support humanities scholars in their research at different levels. In relation to scholarly annotation, during the first phase of CLARIAH (Core, 2015-2018), we have done some research about scholarly annotating behavior, and on the more technical aspects needed to provide structural semantics to annotations (see reference list at the end of this post). We also organized an annotation symposium in 2017 , in which scholars and developers of annotation tools and standards gathered for one day in Amsterdam to align their work and look for future collaborations.

In CLARIAH Plus (2019-2023), one of the aims is to increase the support for the creation and exchange of annotation data between applications. Thus, as a follow-up to the previous activities, and as a way to initiate the next phase of CLARIAH, we decided to focus on interoperability of annotations, of audio-visual sources to begin with. Our aim is to try to facilitate data interoperability between the tools that are commonly used by scholars in their work, and to try to come up with an exchange format for scholarly annotations of audio-visual data based on the W3C annotation model . 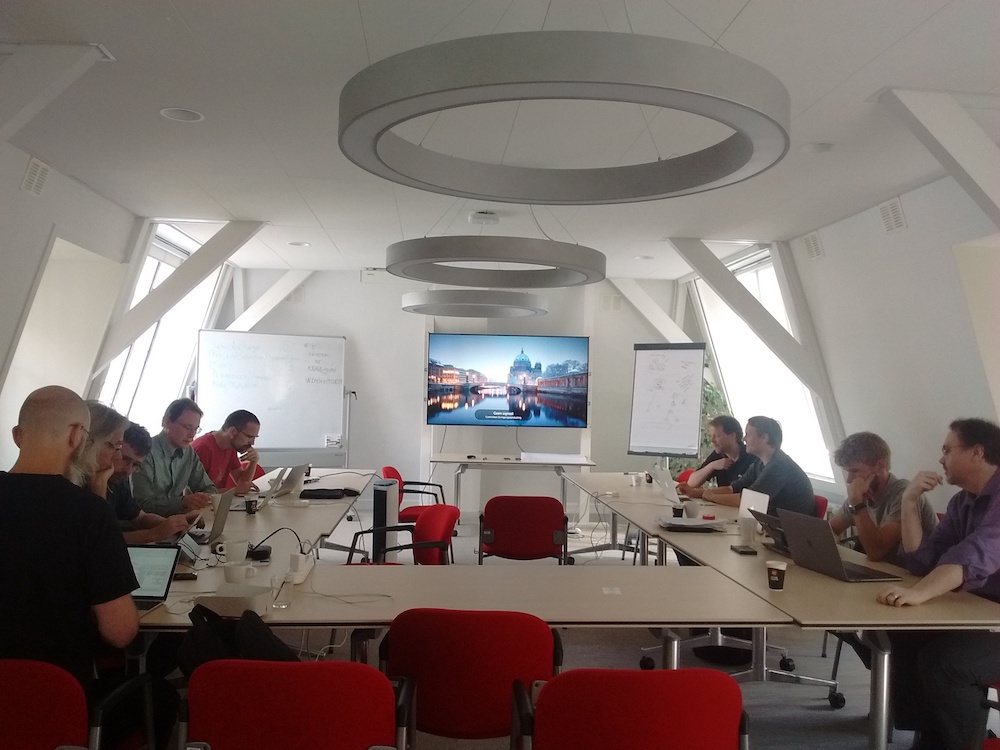 The participants of the expert meeting were the programmers of applications that are being developed in important projects in the Humanities where audio-visual media is at the center. The experts who participated in this meeting were:

The two-day meeting included presentations of the tools´ data models. Following the methodology used in previous interoperability efforts (e.g., by Schmidt et al., 2016), we had a plenary discussion in which the developers identified the main challenges for data interoperability. These included:

These topics were grouped into four themes, and participants worked in groups on each of them:

In the second day, participants summarized the main conclusions of the previous day, and came up with concrete test cases to start exploring options for interoperability. Based on the W3C annotation model, the participants worked on possible cross-walks, i.e. alignments of the key elements that their tools and data models use, so that annotation data can be exchanged. The idea of this second group exercise was to compare, per tool, how each of them will deal with the following cases when exporting/importing:

This exercise brought some major hurdles to the surface, but also generated potential solutions and future plans for improving annotation data interoperability between the involved tools. The participants, besides agreeing on the importance of seeking interoperability to support scholars in their work, also agreed on that this is needed for preserving annotation data for archival purposes, since it is common that scholarly annotations are lost when tools are no longer supported.

The meeting concluded by listing the most important challenges and tasks for next encounter, which will most likely take place in Spring 2019. As preparation for the follow-up meeting, the developers in this group of experts will be collaboratively working on developing the test cases further, and in conducting these interoperability tests with their data. More information can be found in the project GitHub repository .

Notice
At the moment the Media Suite has only been tested in Google Chrome, there may be undetected issues when using this browser.

1. Use of copyright protected data

The CLARIAH Media Suite contains material that is protected by intellectual property law. This material is only permitted to be used within the Media Suite environment. It is therefore expressly forbidden to duplicate and/or publish this material, regardless in what form, for example by downloading material or by making a screenshot (photo of the screen) or screencast (film of the screen), without the explicit permission of the rightsholder.

The Netherlands Institute for Sound and Vision is the tradename of the Foundation Netherlands Institute for Sound and Vision. We are located at Media Parkboulevard 1 (1217 WE), in Hilversum. We are registered in the Chamber of Commerce under the registration number 41194855. Your details are handled carefully and protected satisfactorily. We do so in accordance with the General Data Protection Regulation (GDPR) and other applicable regulations.

How do we collect personal data?

Sound and Vision uses cookies. A cookie is a small file that we send with the webpage, and that your browser stores on your computer. For example, we use cookies to analyse how the website is used, and to remember settings and preferences when you visit our site.

We use cookies to optimise the functioning of our website, and to offer you a better visitor experience.

This site stores cookies on your computer that are related to the functioning of the website. The aim of these cookies is to optimise the user experience by storing your preferences. In no way do these cookies store sensitive data. According to the current cookie regulations, they may be stored without permission.

We store analytical cookies from Matomo on your device. We use these cookies to register which pages you visit, whether you have visited them before, and, for example, which device and browser you use to do this. In this way, we can offer you the best experience when you are searching for information on our website. This data is anonymous, and is not linked to your name, address, email address or other personal data. Your IP address is also anonymised.

Which data do we process?

We process the following personal data from our website users, in so far as we receive this from the identity providers:

What do we process this data for?

We process your personal data for the following purposes:

On what basis do we use the personal data?

Our processing of your personal data for the above-mentioned purposes has the following legal basis:

How long do we store your data?

Is your data shared with other parties?

NO, your data is not shared with other parties.

How is my data protected?

We have taken appropriate technological and organisational steps to protect your data against loss and against use contrary to the rules. We constantly keep up to date with the current situation regarding technological protection of personal data and will do everything possible to prevent the loss or unlawful use of personal data. We do our very best to protect ourselves against the activities of 'hackers'. However, we cannot guarantee this protection, due to continual technological advances.

You have a number of rights. These are:

In addition, you can also:

Where can I go with my questions?

If you have questions about our processing of your personal data, or if you want to make use of one or more of your legal rights, then contact: